In June, I had the pleasure of exploring Stebbins along with Miriam Morrill, who has been exploring ways to represent fire conditions, fire and fire effects graphically. I took some notes during our discussion (at the bottom of this post) and then compiled these sketchbook pages based on photos and my notes. On a clear and peaceful day in April, I brought my son with me to Stebbins and we both sketched our way along the trail. The lizards were plentiful, which was not surprising, but we were surprised at how close many of them let us come. Especially surprising was the western skink (Plestiodon skiltonianus) – I have found these to be particularly shy in the past.

The canyon and hillsides are still much more open due to the fire three and a half years ago, with many spring wildflowers taking advantage of the light.

My son pointed out a chaparral camel cricket (Gammarotettix genitalis) sheltering in the curl of a California tea (Rupertia physodes). 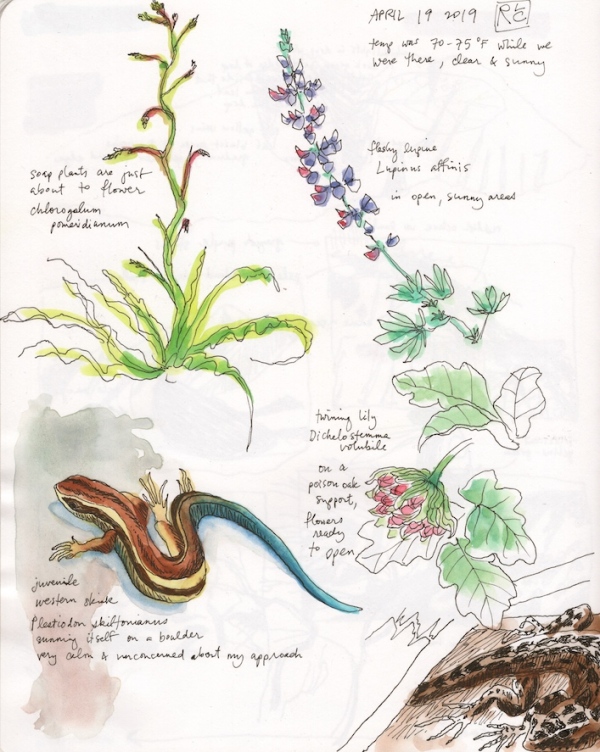 A winter visit to Stebbins at the end of January was the perfect time to look for lichen and other things less easy to spot in more abundant foliage. Curious about how quickly lichens have begun to colonize new substrate, I looked closely at one of the large rocks split open during the fire. A few lichens have begun to grow on the newly exposed faces of the rock, though not nearly as many as on the older outside faces of the same rock. 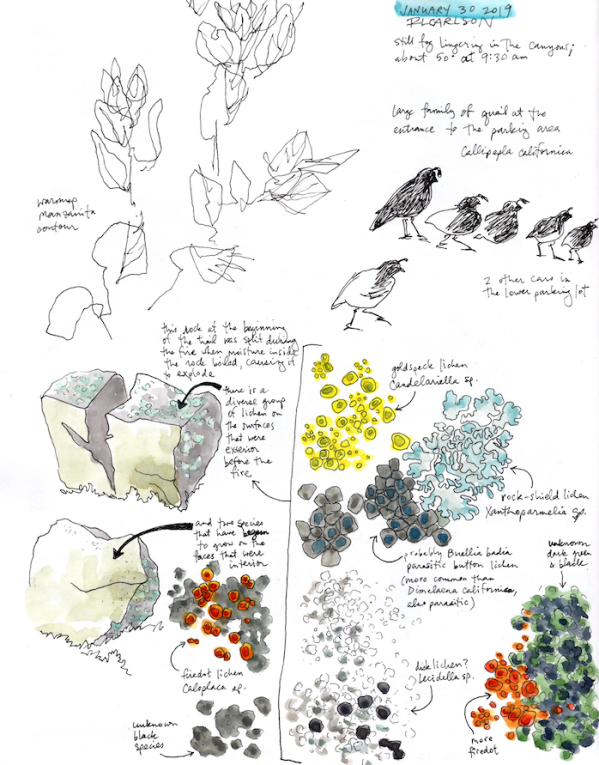 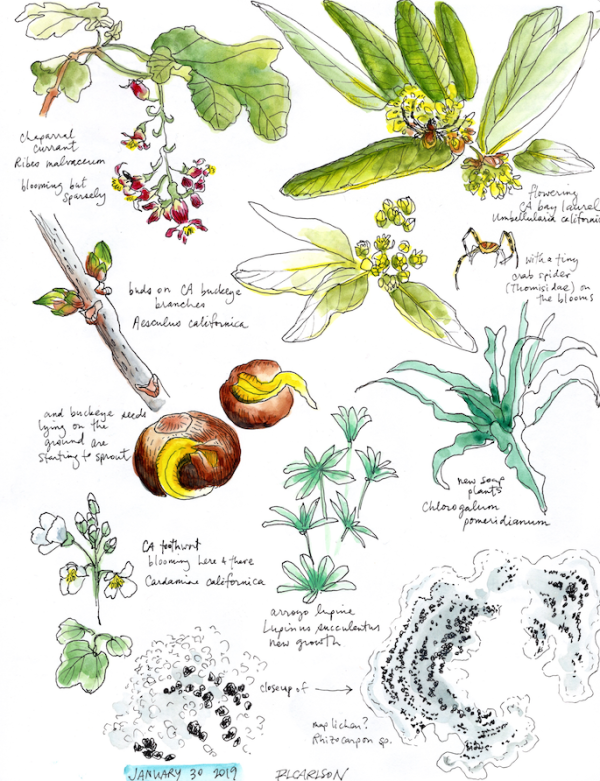 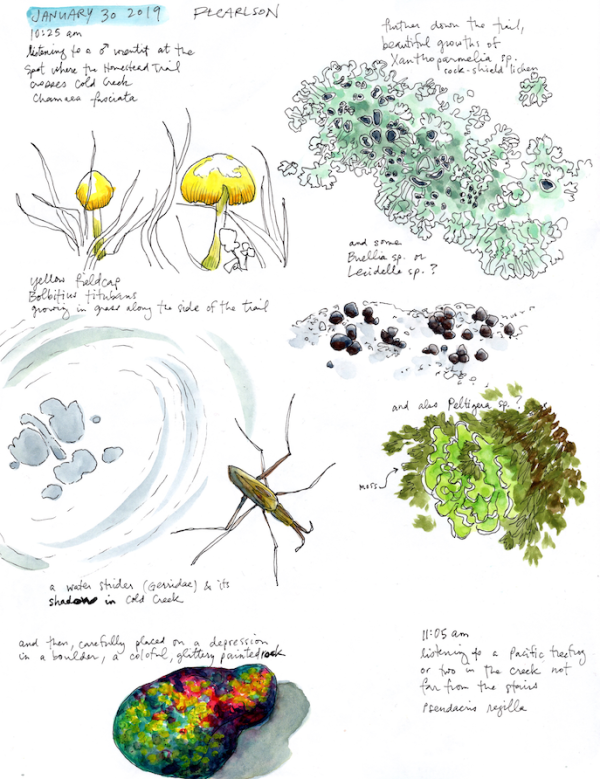 On examining a pitcher sage (Lepechinia calycina) resprouting from its base, I noticed at least three different fungi at work on the dead, burned branches. 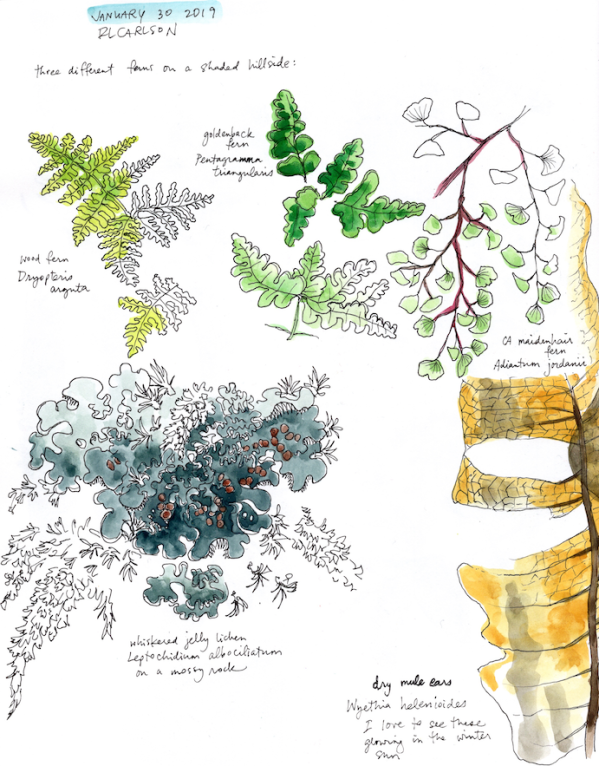 I always look for dried mule-ears leaves (Wyethia helenioides) in the winter, with the lack of canopy after the fire, these are often found in open areas where they catch the sunlight and glow.

While the Cold Canyon trails are closed, the reserve is offering guided hikes to the public (current list of hikes).  I participated in a hike at the end of December, led by Jeffrey Clary, Stebbins Cold Canyon Reserve Manager.  We walked along the canyon trail, discussing the plants that were started to regrow, and how the site is faring five months after the fire. 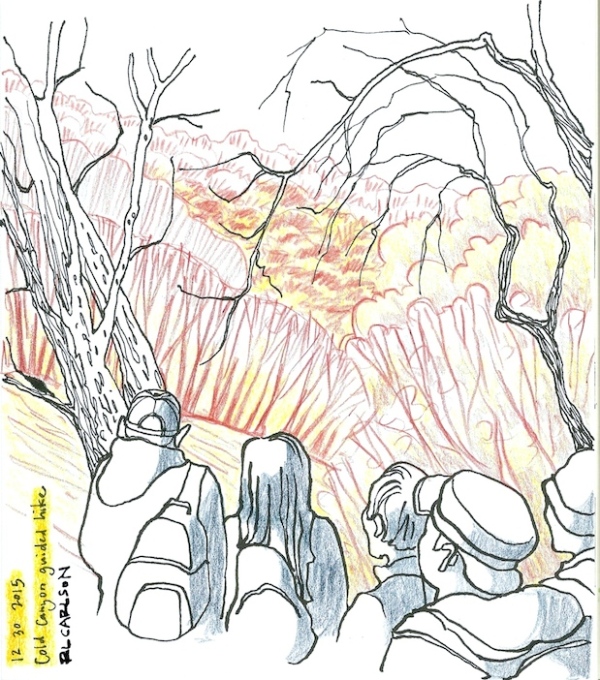 Interestingly, there is less regrowth at this point than might be expected, with the hillsides still quite bare, with many fewer seed regenerating plants than after similar fires.  That is not to say that there is no regrowth yet, though, and hikers found plenty of interesting plants along the trail, growing from seeds, bulbs, and resprouting from stumps.

We also observed other effects of the fire, including many new rock faces, created when the water inside the boulders caused them to explode in the heat of the fire. 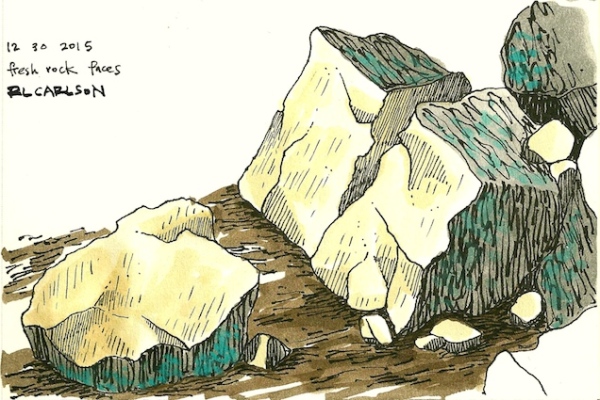