Near the beginning of what is likely to be an intense fire season, the area north of Cold Canyon that has burned twice before over the past four years was in flames again.  A total of 2,269 acres burned north of Highway 128 near Winters over three days in early July: 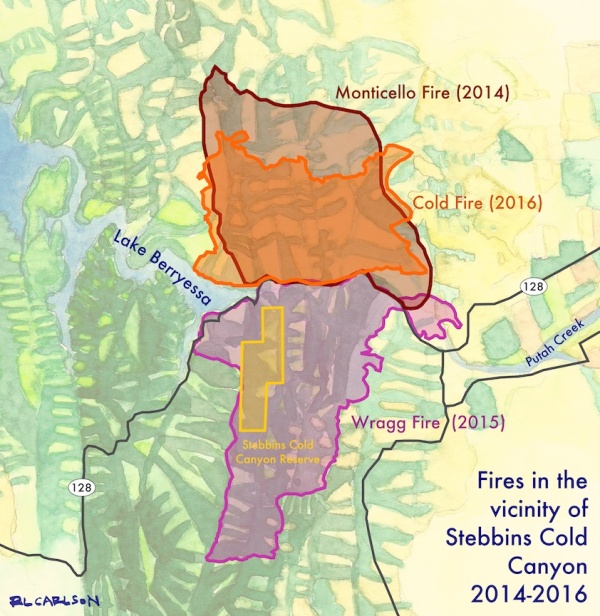 While fire is a necessary component of a healthy ecosystem, when the same area burns repeatedly with only short intervals between fires, seed banks are destroyed and trees that might have survived a single fire are unable to recover enough to withstand the next fire.  We still have a couple of months or more of hot dry weather, and plenty of extra fuel this year as a result of the wet winter.  I will be surprised if there are not more fires in this area this year.

In November, on a cool but not cold day, I hiked to the top of Blue Ridge.  Looking out at Lake Berryessa, it was easy to see part of the area burned by the Cold Fire last summer. 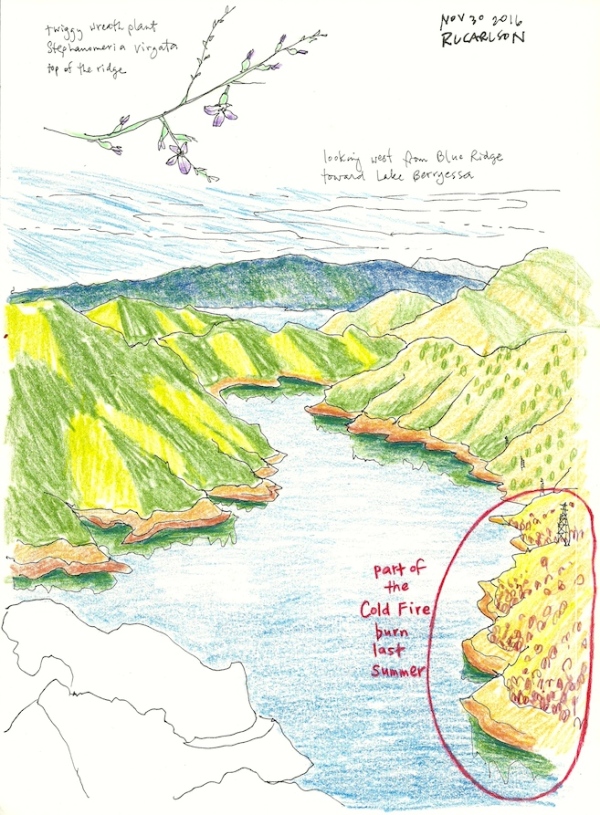 On the way up the trail, I looked for mushrooms enjoying the damp left by rains earlier in the month, and observed regrowth of mountain mahogany (Cercocarpus betuloides), blue oaks (Quercus douglasii), and chamise (Adenostoma fasciculatum).  The leaves of yerba santa (Eriodictyon californicum) along the trail were losing their waxy coating.  The waxy coating, presumably beneficial in retaining water during dry months, is resinous and highly flammable.  Yerba santa seeds may require fire to germinate and can also resprout from rhizomes following fire.

Hillsides stripped of their erosion-controlling vegetation by the fire have been shored up with erosion matting installed by Tuleyome and Friends of Stebbins Cold Canyon Reserve.

Looking across Cold Canyon I was struck by the “rivers” of dead tree branches running down the canyons of Pleasants Ridge.  They made a ghostly grey against the greens of new growth and the hills still mostly yellow from the summer.

The Wragg Fire started just over the ridge to the west of Cold Canyon, rushing quickly over the hill and down into the canyon.  Once there, it remained in the canyon, generating winds that caused it to cycle within the canyon, according to Jeffrey Clary, Stebbins Cold Canyon Reserve Manager.  This greatly increased the intensity of burning in the canyon.  The differences in fire intensity across the landscape burned will lead to interesting opportunities to compare rates and types of regrowth in the coming years.

Between July 22 and August 5, 2015, the Wragg Fire burned over 8,000 acres in Napa and Solano Counties, including the entirety of the Stebbins Cold Canyon Reserve near Lake Berryessa.

On July 28, driving home in Davis, I happened to notice a new large plume of smoke, further south than where I had seen smoke previously.  This was the day the fire reignited, after having been at 80% containment.  It took another seven days to reach full containment. 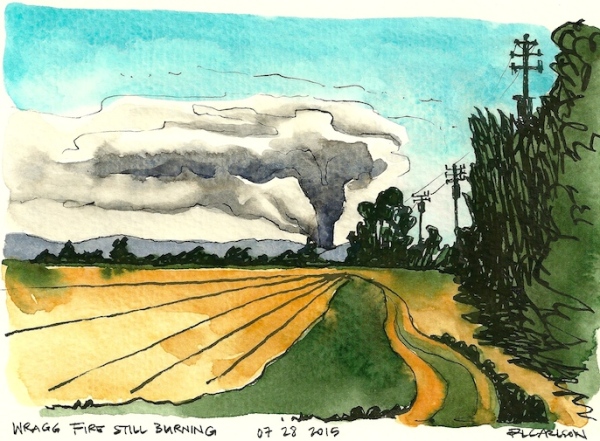 As I stood at the side of the road watching, an air tanker flew overhead, heading away from the fire.

A couple of days earlier, I had seen the completely burned hillside west of Winters, making a stark contrast with the hills in their usual summer gold and green to the north.